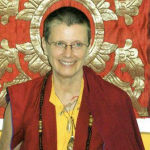 Lama Karma Chötso began her study and practice of Tibetan Buddhism in 1982 when the fully enlightened master Kalu Rinpoche bestowed the Kalachakra Empowerment in New York City. She was fortunate enough to continue to take teachings and empowerments from Kalu Rinpoche, who ordained her as a novice Buddhist nun in 1986 prior to her entering the traditional three-year, three-month retreat at Kagyu Thubten Chöling Monastery/Retreat in upstate New York. The retreat, held in strict seclusion, was guided by Lama Norlha Rinpoche, one of the great meditation masters of the Kagyu lineage, and was completed in 1990. After that, Lama Chötso added to her training by learning Tibetan painting, traveling to Asia twice on pilgrimage and living in Nepal for a while to study and practice there. She then returned to KTC in America.

Late in 1996, Lama Karma Chötso came to South Florida to prepare for Lama Norlha Rinpoche, Abbot of KTC, to visit and teach in Hollywood. At the end of his teachings, Rinpoche instructed her to stay in Florida and begin teaching. When Rinpoche returned a year later, a little house had been rented in Hollywood, a shrine room set up, and many students were waiting for him. Rinpoche gave the name Kagyu Shedrup Chöling (KSC) to the sangha, which means “the Center for the Study and Practice of the Kagyu Lineage” of Tibetan Buddhism.

Lama Karma Chotso was the first ordained Buddhist of any Tibetan lineage to actually live in South Florida. She maintains centers in three counties and has lectured in many universities, libraries, health centers, and churches. She has given blessings to the manatees at the Miami Seaquarium and the dolphins at the Dolphin Research Center in Grassy Key.

For seven years, Lama Karma Chötso’s community outreach included teaching T’ai Chi and meditation to the inmates at Broward Correctional Facility for women. After having been a member of the Board of Directors of the Interfaith Council of Greater Hollywood for 9 years, she held the position of President for one year. She was also a Professional Volunteer Chaplain for Hospice Care of Broward County, assisting in the dying process and performing Buddhist death rituals. Dharma Sunday (2/14) — Solitude and Its Many Forms

Dharma Sunday (2/14) — Solitude and Its Many Forms

Scroll to Top
We use cookies to ensure that we give you the best experience on our website. If you continue to use this site we will assume that you are happy with it.Ok