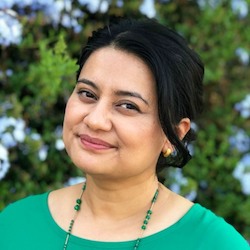 Dekila Chungyalpa is the founder and Director of the Loka Initiative, a capacity building and outreach platform at the University of Wisconsin – Madison for faith leaders and culture keepers of Indigenous traditions who work on environmental and climate issues. Its mission is to support faith-led environmental and climate action efforts, locally and around the world, through collaborations on project design and management, capacity building, training, media and public outreach.

Dekila began her career in 2001 working on community-based conservation in the Himalayas and went on to work on regional climate change adaptation and free flowing rivers in the Mekong region for the World Wildlife Fund. In 2008, she helped establish Khoryug, an association of over 50 Tibetan Buddhist monasteries and nunneries implementing environmental projects across the Himalayas under the auspices of His Holiness the Karmapa, the head of the Karma Kagyu lineage of Tibetan Buddhism.

In 2009, Dekila founded and led WWF Sacred Earth, a 5-year pilot program that built partnerships with faith leaders and religious institutions towards conservation results in the Amazon, East Africa, Himalayas, Mekong, and the United States. She received the prestigious Yale McCluskey Award in 2014 for her work and moved to the Yale School of Environmental Studies as an associate research scientist, where she researched, lectured and designed the prototype for what is now the Loka Initiative.

Dekila is originally from the Himalayan state of Sikkim in India and is of Bhutia origin. She is the daughter of the late Tsunma Dechen Zangmo, a Tibetan Buddhist nun and teacher from Sikkim. She speaks five languages: Sikkimese, Tibetan, Nepali, Hindi and English.