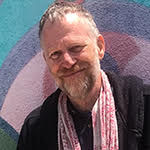 Award-winning author Dean Sluyter (pronounced “slighter”) has taught natural approaches to meditation and awakening since 1970. He gives talks, workshops, and retreats throughout the United States and beyond, from Ivy League colleges to maximum-security prisons. His media appearances have included National Public Radio, The New York Times, Coast to Coast AM, The Dr. Oz Show, and O, The Oprah Magazine.

A grateful student of Eastern and Western sages in several traditions, Dean has completed numerous pilgrimages and retreats in India, Tibet, Nepal, and the West. He is known for conveying authentic teachings in forms that are relaxed, accessible, and down-to-earth.

In addition to writing and teaching, Dean narrates audiobooks, co-hosts The Filmosophers movie podcast, sings with the Threshold Choir, and happily zips through the streets of Santa Monica on his Vespa.

Dean lived in New Jersey for thirty-three years, where he developed classroom meditation programs at The Pingry School and worked with inmates at Northern State Prison and Mountainview Youth Correctional Facility. He is now on the faculty of the West Coast Writers Conferences and is married to documentary filmmaker Yaffa Lerea