Holding Still in the Middle of the Fire

Lama Lama Liz writes about their departure from Bhutan, where she and her husband Chris Hall (Wonderwell’s Operations Manager) were planning to spend the month of March on pilgrimage and retreat.  (Here’s her first report from Bhutan about their initial experiences there.) –Ed.

Leaving Bhutan was a race against the virus. Every morning, I found myself, phone in hand, walking around the abandoned hotels where we were the only guests, seeking out the best location for good reception, attempting to learn what that day’s news had to say.

Initially, once the chaos over the first diagnosed case of COVID-19 died down, Bhutan seemed to settle. The King’s sane and wise advice calmed the people and eased the atmosphere. And when, a few days later, the seventy-two year-old American man who had the virus was airlifted on a special plane back to the USA, I thought we could finally relax. Chris and I would continue our pilgrimage and I could finally turn off my phone and disconnect. It was a great thought, but I was wrong.

Instead, from the vantage point of Bhutan, it felt as if this one case of COVID-19 was the spark that ignited the explosion of the virus around the planet. Of course, this wasn’t true, but as I read the news and my family’s texts and saw how rapidly the virus was expanding, extending its reach, and how, simultaneously, the world was contracting, shrinking into a protective stance, I realized that there would be no turning off my phone, no disconnecting from the world karma that was transforming the face of our planet.

First, Nepal closed its borders to foreigners, erasing our plans for stopping there to visit my sister and rendering our plane tickets back to the USA null and void. Scrambling to rebook us on different flights on my tiny phone screen took hours. Eventually, I succeeded and we left our hotel to hike into the mountains of Phobjikha, one of the highest valleys in Bhutan and a powerfully sacred space for practice. For some hours, we settled, resting at ease beneath the warmth of Himalayan sun, coming to be, silent, merged into the song of the wind in the towering pines. Peace. Stillness. The natural world slowly spinning beneath the light and shadows of high, white clouds.

Second, India announced that no international flights would be allowed to enter or leave the country for a week. Staring with horror at my phone screen, I realized that the dates corresponded to the dates of our flight home, eclipsing the new bookings that I had made when Nepal closed her borders. The date for this restriction was set to end on the date of our flight back to the USA. Could I trust that international flights would actually resume on that day? I didn’t feel at all confident. In the USA, the virus was rapidly expanding. My parents entered indefinite lockdown in Idaho in the epicenter of the virus in that state. Calls to Expedia and United Airlines met with no response, only automated messages about the volume of calls and the extremely long wait times.

Leaving all the threads hanging, we arranged our cushions on the floor of a temple sacred to the mad yogi, Drukpa Kunley, centuries old, dark with ancient shadows and flickering with the flames of butter lamps. Silence. The distant cry of a raven. The cool touch of temple air on my skin. A sense of something very old, very still, very vast. The flow of blood in our veins slowed. Breath came and went. The body knew just how to be, half timelessly unraveled, half firmly rooted in the present.

Third, we arrived, late in the day, after hours of driving the wild, twisting roads of Bhutan’s mountains, at our furthest destination, the region known as Bumthang, beneath the thundering mountain where the Nyingma master, Longchenpa, lived in exile from Tibet and composed some of his greatest treatises on the Dzogchen path. Our hotel was deserted. For a while we wandered about, calling out the Bhutanese greeting, “Kuzuzangpo!”. Only the chill, afternoon wind answered. After some time, we discovered the staff huts. Some banging on doors produced the assistant manager, who stared us in shock. “Oh no, madam,” she said to me, “Bhutan government has ordered the closure of all hotels. There are no more tourists in Bhutan. We are leaving for our villages.” More conversation and some phone calls allowed us to stay the night, alone in a small cabin on the side of a wooded slope, playing cards, drinking powered milk, and huddling beside the wall heater.

Fourth, the next morning, with the weak WiFi coming and going, I read an announcement that the US State Department had issued a recall for all US citizens abroad, urging us to come home immediately or be prepared to stay abroad indefinitely. With Nepal and India shut down, only one way remained for us to return to the USA – via Thailand. I also learned that Druk Air, the only airline flying into and out of Bhutan, was about to discontinue all flights. Only two flights remained to Thailand. There was no choice. Having reached our destination, we had to turn around. We had to return to Thimphu, Bhutan’s capital, eleven hours by car, as soon as possible.

I was crestfallen. Longchenpa’s place, Tharpaling, a monastic complex of temples perched high on the slope of a mountain across the valley from us, had been our central pilgrimage destination. That morning, we sat in the car, facing Tharpaling, windows open to the fresh, cold air. The day was gray and chill. The energy of the monastic complex and the mountain that towered over it where Longchenpa meditated, thundered across the valley, engulfing us, erasing our thoughts, opening our awareness far beyond the confines of our little car. For a time, the reverberations of that master’s profound liberated energy echoed across the centuries. We came to ease, to peace. When, at last, we began the long drive back to Thimphu, we laughed, snacking on cream crackers and peanuts, and taking turns watching the unfolding landscape.

Finally, in Thimphu on the weekend, with the Druk Air office open for only two hours, we sat on plastic chairs waiting for our number to be called. Late the night before, after driving all day, alone again in a different hotel, surrounded by a ubiquitous cacophony of barking dogs, I’d finally found a flight to the USA via Thailand and Japan. Various documents were needed to enter Thailand, documents we could not get, but I booked the flight anyway. Long discussions later, we also had tickets on the second-to-last Druk Air flight to Thailand, Monday morning, ten days before we had originally been scheduled to leave Bhutan.

We had only one day left in Bhutan and we knew what we had to do with it – visit the most sacred site in Bhutan, Taktsang, the Tiger’s Nest, where Guru Rinpoche manifested as the wrathful form of Dorje Trollo riding on the back of his consort, Yeshe Tsogyal in the form of a pregnant tigress.

Climbing the trail to Taktsang, I wondered at how abandoned it was. With all tourists gone from Bhutan and no tours operating, the usually packed trail was empty. Only silence and the smells of jasmine and pine, the slow plodding of our feet, the somersaulting white water of a waterfall. We arrived at the temple. A few monks were visible here and there like splashes of red paint on the temple walls. We entered the cave where the manifestation of the wrathfully compassionate form of Dorje Trollo manifested centuries ago. Only one old monk sat nodding over his pecha in a small window seat. We prostrated and sat on our cushions.

An old stillness, as deep as the ocean, flowed over and into us. The rock walls of the cave emitted a slow flow of cold air. Above us, a huge figure of Dorje Trollo, wreathed in flames, rolling his bloodshot eyes, gestured wildly with the pointed kila he brandished in his raised right hand. The orange stripped coat of the tiger, Yeshe Tsogyal, seemed to merge with the flames of burning compassion surrounding them both. I let myself relax into the embrace of stone that was both grounded and stable, vivid, burning and vitally present. I noticed the rushing silver sound of the waterfall through that old silence – the gentle patter of rain on the rock.

And this is it, I thought. This is what we will be doing for the foreseeable future. We must hold still in the midst of our burning thoughts, our anxieties, our fears, and our emotions. We must remember to settle, to allow our bodies to do the knowing, the resting, the connecting to the earth beneath us. We have a chance now, while the world has stilled, to feel the wind and the sun, to walk outside in the rain, to notice the small, yellow faces of dandelions emerging from the leaf mold and mud. We have a chance to remember what matters in this fleeting, fragile life – our connections, our loves, our families, friends, communities and our host, this endlessly beautiful and constantly changing earth.

Seventy-two hours later, after nearly thirty hours in the air and a night in the echoing emptiness of the Suvarnabhumi International Airport in Thailand, we finally arrived back home in New Hampshire. Our house felt warm, welcoming, like home. As we collapsed into bed, I gave thanks for our safe return. As our time in Bhutan receded like a vivid dream back into memory, I thought about the days to come and the opportunities that now stretched out in front of us for finding stillness and space in the midst of chaos

I thought for myself and for all beings, when we sit, we can touch the stability and groundedness of the earth; we can open to the vastness of the sky; we can recognize that we are the lightening rod connecting heaven and earth. We have an opportunity to strengthen and vitalize that connection. The world karma unfolding now is something we cannot predict or control – it is a force with an energy and lifespan of its own that will exhaust itself in its own time. But we do have a choice. We have a choice about the kind of relationship we will forge with this karma. Will it be a relationship fraught with fear and anxiety, unsettled, ungrounded, and disconnected to any source of sanity and compassion? Or will it be a relationship that relaxes in the flowing energy of change, of emotional upheaval, of not-knowing?

Can we hold in mind/body the truth that we are meant to be here now, to experience and feel all the energies surging around and through us? Can we recognize the truth that these energies are a radiant expression of love – of the beauty and tragedy of being human? When you sit, feel the earth. When you sit, feel the sky. Remember that you came here, that you took up this path, to learn what it really means to be fully human, awake and aware, in suffering and in joy, holding still in the middle of the fire. 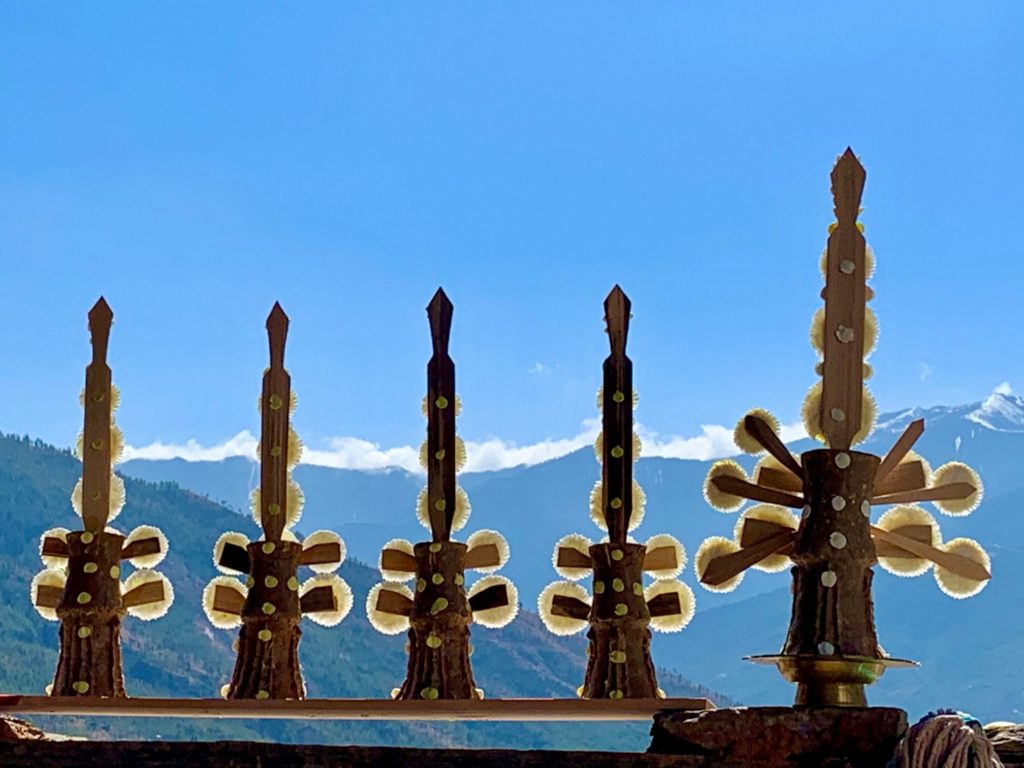 Butter offerings on the wall outside Wangditsi Gompa in the Thimphu Valley, when I hiked up in the early morning to do circumambulation

© 2023 Natural Dharma Fellowship. All Right Reserved. Made with  by UX Studio